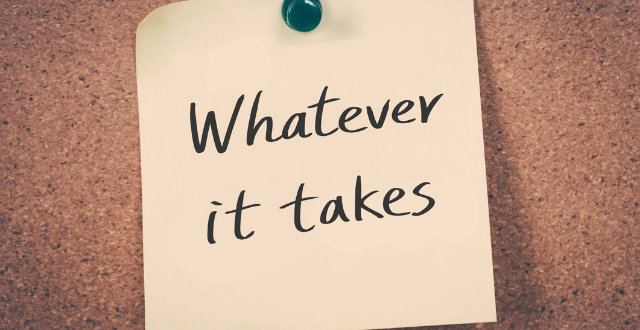 WHEN WE THINK ABOUT ENTREPRENEURS, THE TENDENCY IS TO VISUALISE TRAIL-BLAZING RISK-TAKERS, WHO THROW FINANCIAL CAUTION TO THE WIND AS A MEANS TO FUTURE REWARDS.

But assuming the monetary risk is only one side of the entrepreneurial coin. The other, characterised by an enterprising spirit; imagination; initiative; an ability to think outside the box and undertake new projects with enthusiasm and an open mind.

In these terms, it’s easy to see how thinking like an entrepreneur can benefit us as much in the corporate world as it does our individual ventures. To demonstrate the ‘how’ of true entrepreneurship, we’ve enlisted the advice of some of the winners from the 2014 NatWest everywoman Awards, all of whom have built hugely successful businesses from scratch.

Our 2014 Women of the Year, Karen Betts, founded Nouveau Beauty Group to meet a demand for cosmetic artistry for cancer, burns and alopecia patients. Her ‘scattergun’ approach in the early days of her business earned her a reputation for expecting everything to be done ‘in ten minutes’.

When staff were unable to perform to her timescales, Karen ‘wrongly assumed’ that she was the only person who could get things done. It took time, she says, to understand the value of a methodical approach.

Being in business can sometimes feel like constantly pinging between successes and setbacks. Building your resilience – or ‘bounce back-ability’ - is critical.

‘In the early days we showed our watch designs to some stores who didn’t feel that our product was right for their customers. We didn’t let their opinions dishearten us – we listened, but carried on working through our target list. A year down the line, one of the stores that wasn’t interested is now desperate to stock our brand.’

When we’re faced with a heavy workload, it can be tempting to forge through the to-do list at breakneck speed. But focusing on ‘doing’, can give rise to a mentality that planning, strategizing and thinking ‘don’t count’. ‘As a creative person I initially struggled with the number of meetings that needed to be held as my business grew,’ says Karen Betts.

Allocating time for taking stock is as important to the success of corporate objectives, as is knowing when to take a step back. ‘Over the last 20 years I have worked hard as a therapist to challenge and change the misperception of cosmetic tattooing. Now, I need to tattoo a little less and devote time to driving the business forward,’ says Karen.

GOLDEN RULE #4: TO FIND THAT WORK-LIFE BALANCE, YOU HAVE TO PLAN ‘LIFE’ EVERY BIT AS MUCH AS ‘WORK’

Whether we’re running our own company or working for someone else, we all have deadlines, objectives, and seemingly never-ending to-do lists.

While the work-life balance can seem elusive, entrepreneurs realise that as well as planning their workloads, they also have to plan their downtime. ‘It’s terribly hard to step back from a business when it’s your baby,’ admits Jemma Fennings. ‘I run all the social media for our brand, which makes downtime in the evenings very hard, as Twitter can get really busy. I’m working on trying to switch off my mobile an hour before bedtime. You need to do these little things for the greater good so you don’t reach burnout.’

The downside of 24/7 connectivity is also something Karen Betts knows all about:

But those mistakes, she says, are the fuel for tackling critical situations. ‘One of my biggest mistakes was employing a PR company who secured practically no coverage, simply because they didn’t understand my business. The mistake cost me money I couldn’t get back, but it taught me that I needed a tailored campaign to reach the right consumers.’

Sarah Heward, Founder of The Real Food Café agrees that our weaknesses can lead to our deepest insights. ‘I regularly made poor judgment calls to do with spend, people and all kinds of other things. Emotion and anxiety took over because I didn’t have the confidence to make the right decisions,’ she says.

‘But as soon as I chose to tackle those issues, things started falling into place. I have learned that the way to deal with mistakes is to have the courage to trust your instincts, ask for help, and find the right people to support and challenge you. Blame is what victims do and blaming yourself is part of a vicious cycle. We all make mistakes; I make fewer now than I used to but when I make one nowadays, I get over it - and get on with things.’

GOLDEN RULE #6: WHEN GIVEN A GOLDEN OPPORTUNITY, SEIZE IT WITH BOTH HANDS… THEN FIGURE OUT HOW TO DO IT!

Sometimes we reap rewards through carefully laid plans. Other times opportunities catch us unawares. When they arise out of the blue, entrepreneurs scream ‘yes!’ while the more risk-averse among us might run for the hills.

‘I was called up by the Buyer at Tesco saying that we needed to launch in three week’s time,’ says Julianne Ponan, whose super food brand is the only one in the UK to make it onto the supermarket’s shelves.

'We’d normally require 12 weeks, but there was no way I was passing up the opportunity. I called on my parents, brother, sister, even my sister’s boyfriend and my other half’s parents to get everything packed up for Tesco. And we did it! There are always options – look around until you’ve exhausted each one. If you want to do it, you won’t find an excuse not to.’

‘There are days when I want to give up,’ says Julianne Ponan, ‘and on those days I take a moment to think about all the successes. Recounting a low point from the early days of turning around a debt-ridden business, she describes herself as ‘drained from all the negativity’.

Doors were constantly being slammed in her face; potential investors rejected her proposal on the grounds of the business’ extensive losses, her age and lack of experience, and, on one occasion, even her gender.

The moment of reflection enabled her to carry on, and in the first six months of 2014, Creative Nature achieved twice its 2013 turnover in just the first six months. ‘If you believe you can do it, you’re only cheating yourself if you don’t put in the work.’

GOLDEN RULE #8: KEEP YOUR VISION FLEXIBLE SO THAT WHEN SOMETHING GOES WRONG YOU DON’T WASTE TIME BEING A PERFECTIONIST

‘Retail is detail,’ says Athena Award winner Sarah Heward, ‘but however much you plan, there will be opportunities and threats which demand that you change.’

A clear vision is important, not just to inspire the workforce or even the leader herself, but also to excite and attract customers. But being too much of a perfectionist when it comes to our long-term goals can lead to inflexibility when changing forces demand that we adapt.

‘I am a perfectionist,’ says Sarah, ‘but I still have to trust my instincts and know when to flex my actions.’