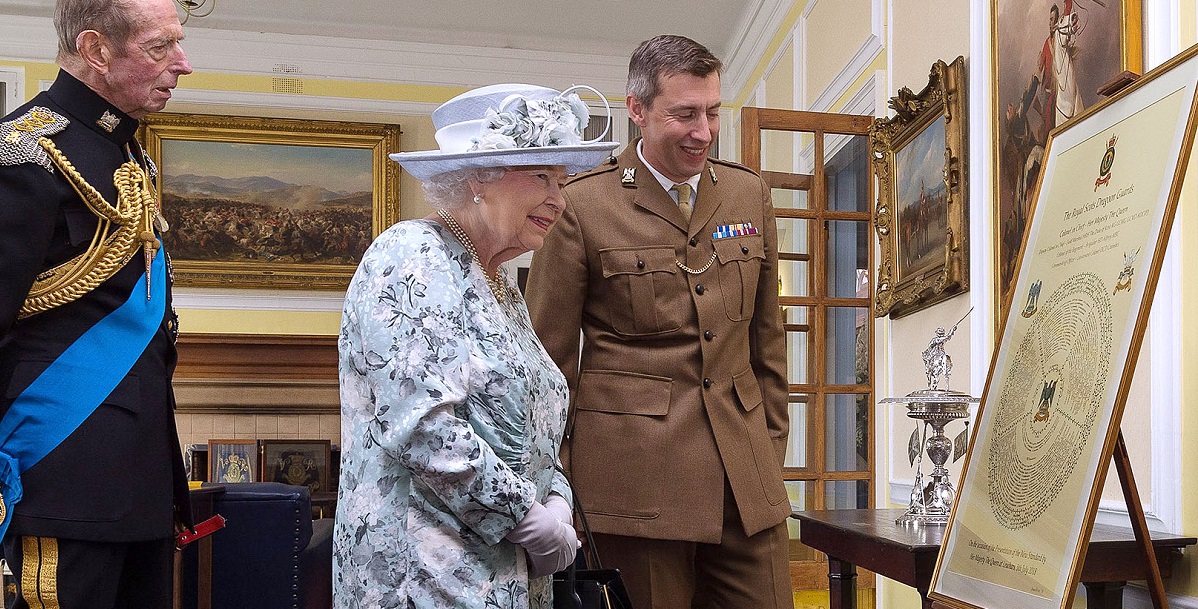 A Shropshire-based entrepreneur is on the way to global success thanks to the unique military artworks she has helped to bring back with a modern twist.

The rolls of honour designed and painted by former council worker Clare Villar have found homes at army regiments in the UK, Canada and Australia. And now the artist – who runs Clare Villar Military Art – is aiming to branch out into other parts of the armed forces, as well as organisations such as sports clubs or masonic lodges.

Having trained as an illustrator, Villar was working as an environmental protection officer at Shropshire Council in 2002 when she was approached by Colonel David Leigh of the Royal Mercian Lancastrian Yeomanry – the regiment Villar’s husband had previously served in.

A new take on an old idea
“Leigh was leaving the regiment and he wanted to give something as a parting gift to say thank you,” Villar explains. “He’d done a bit of research and he discovered there was something called a roll of honour, which had been done many years ago. They were written on stone or wood and they used to commemorate fallen soldiers. His idea was to update that, and we decided we were going to include all the current serving soldiers. We had to design something that would include all those 650 names, plus the regiment’s cap badges.”

The finished artwork consisted of a circle of names split into squadrons, surrounded by the badges. “That took me six months. Colonel Leigh then presented it to the regiment at the barracks at Dawley Bank in Telford, and that was the last I thought of it.”

Fast-forward 12 years, and Villar was approached out of the blue by a colonel from the Wessex Yeomanry, who had seen the Royal Mercian roll of honour on a visit to the barracks. This led to another commission, Villar says. “At the presentation of that artwork, I got a tap on the shoulder from General Sir Richard Shirreff, commanding officer of the King’s Royal Hussars.”

“Shirreff said, ‘We’ve got our tercentenary in 2015, and we’d like you to create a roll of honour to be presented to the Princess Royal, the regiment’s colonel-in-chief’. At that point I thought, this is going really well.”

The final push Villar needed to set up her own business came a year later, when she was offered voluntary redundancy by her employer. “I thought, if I don’t take this leap now and set up on my own, I never will,” she says. “It was a very scary moment, but it was all to do with timing – I had some work in the pipeline, and the redundancy money certainly helped.

“I think if I hadn’t been offered redundancy, I wouldn’t have jumped – and I’d probably still be in the same job now.”

“I want my artwork to last for hundreds of years. To play a tiny part in military history – to me, that’s absolutely mind-blowing”

The key challenge was to ensure that new commissions kept coming in quickly enough. “I had no business experience, no PR experience and I couldn’t afford to pay anyone to help me,” she says. “I thought I’d have to throw myself into getting commissions, getting on to social media sites, doing everything I could to make the most of this niche and the fact that no one else was doing anything like it.”

Villar adds that it would be difficult for other entrepreneurs to copy her idea and compete with her. “In theory, if someone wanted to do a computer image of my roll of honour, they could – but the regiments don’t want that. They want something hand-painted and handwritten.”

Building on success
Social network LinkedIn has been Villar’s biggest source of new business. “I can get in touch with generals and brigadiers across the world on LinkedIn, so I send them an invitation to connect saying who I am and what I do. Sometimes they respond and sometimes they don’t – but if they do take a look at my website, my work stands for itself.”

Villar’s first Canadian commission came after she was spotted by an officer from the King’s Own Calgary Regiment on LinkedIn. And she managed to transform this opportunity into more work with a savvy bit of marketing. “I decided it would be a good idea to get some TV coverage so I could reach other regiments there,” she explains. “I contacted a Canadian TV journalist and said we were doing the presentation of my artwork and that the colonel would really like it if it was filmed. Then I went to the colonel and said that Canadian television think this is really fascinating and want to film – are you happy for them to do so?

“He agreed, so it all worked out – but I did have to do a little bit of manoeuvring.”

As well as a string of clients in Canada, Villar also received a commission from the Australia team at last year’s Invictus Games, an annual event for veterans and wounded armed forces personnel from all over the world.

She has also entered a number of business competitions in order to promote her company, and was named as a finalist in the 2018 Great British Entrepreneur Awards. “Awards help you gain more exposure and add prestige,” she says. “They help you look like you’re taking things seriously.”

Villar’s roll-of-honour artworks take her around three weeks to produce and typically cost between £3,500 and £5,000. But she makes at least as much again from selling a run of prints of various sizes at around £30 each.

“I want my artwork to last for hundreds of years,” Villars says. “To play a tiny part in military history – to me, that’s absolutely mind-blowing.”

Top three tips on making a business out of a hobby
For artist Clare Villar, turning her lifelong passion into a successful and growing business has been hugely satisfying. But what advice does she have for others who’d like to make money from a hobby or other interest?

1. Research your market
“For me, the artwork is the easy bit,” Villar says. “The hard part is getting the commissions coming through. So I would say, research your market; see who your competitors are and what they’re doing.”

2. Get the business ready before launching
“It can be better to build up a hobby where, as I was, you’re at the stage you’re effectively doing two full-time jobs,” explains Villar. “Right before I set up my business, I was working at the council during the day, putting the children to bed and then starting on my artworks at 7pm or 8pm and carrying on until 3am.”

3. Be prepared to network
Villar adds: “It’s up to you to put your name out there. I love going to networking events: you never know who you’re going to meet. I believe in my product, and I’m naturally a very driven person. Those are the qualities that have underpinned my success.”

Brought to you by Natwest