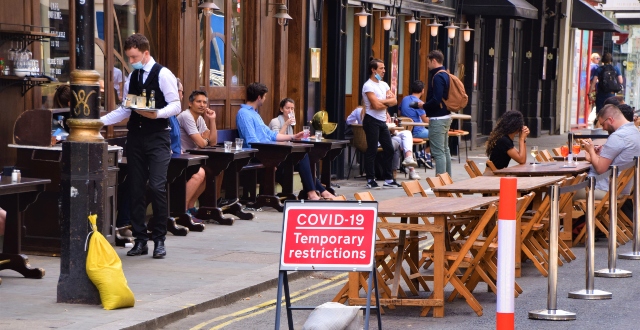 Firms in the hospitality and leisure sectors are likely to be hit hardest by the latest coronavirus legislation limiting the size of groups that can meet both indoors and outdoors.

A new rule introduced in much of the UK on 14 September limits social gatherings in order to control the spread of coronavirus across the country.

While the specifics vary in England, Wales and Scotland, it means that, in the main, people are no longer permitted to gather in groups of more than six, including private residences and outdoor spaces such as parks or beaches. Northern Ireland introduced similar restrictions towards the end of August.

When pubs, restaurants and other hospitality venues were first allowed to reopen in July, government guidance said group sizes should be limited to six people. But the key difference with this latest policy is that observing the “rule of six” is now a legal requirement, with police able to fine law breakers £100, doubling with each offence up to a maximum of £3,200.

There are exemptions from the rule of six: it does not apply in work, education, fitness or childcare settings, and larger gatherings are still allowed at weddings, funerals, places of worship and for organised team sports. But it will have a significant impact on businesses that offer services to large groups, such as holiday accommodation providers or firms running group activities like walking tours.

In England, the rule of six includes children and replaces the previous upper limit of 30 people. Households made up of more than six family members or friends can continue to meet, as can larger groups that are part of a support bubble.

The situation in Scotland is roughly the same, although children aged 12 and under do not count towards the six maximum, and there is also a limit of two households meeting at any one time.

In Wales, children aged 11 and under are exempt from the law. However, the Welsh rules only relate to indoor gatherings. Outdoors, the previous limit of 30 people will continue to apply.

Meanwhile, rules in Northern Ireland have reduced the number of people who can gather indoors in a private home from 10 people from four households to six people from two households. Gatherings outdoors have also been reduced, from a limit of 30 people down to 15.

How have businesses reacted?

Emma McClarkin, chief executive of the British Beer & Pub Association, has said the change in legislation will have an “immediate cooling impact” on the public’s confidence to visit pubs.

“It will also have a direct impact on trade that will be felt hard across an industry that is already struggling to get back on its feet,” she added. “At such a delicate point in our recovery after a steady start this summer, as we head into autumn and winter where we expect trade to already slow down, this is very concerning.”

“It will have a direct impact on trade that will be felt hard across an industry that is already struggling to get back on its feet”Emma McClarkin, chief executive of the British Beer & Pub Association

McClarkin said the government should extend business rates relief, the VAT cut on food and soft drinks and the furlough scheme – which is due to end in October – to help pubs survive and protect jobs.

Peter Lloyd, chef owner of the Sticky Mango restaurant in London, says: “There is a positive and negative perspective on the new rules: positive because some people will be encouraged to continue to go out in smaller groups, knowing that there will be fewer larger groups out and about; but negative as it puts even more uncertainty on future months.

“Being able to capitalise on the period leading to Christmas was an essential part of [our] business forecast, to try and start to pay back the growing debt, bounce-back loans, deferred VAT and the increased costs of becoming Covid-secure. The loss of Christmas parties during the busiest two months of the year is going to have a huge effect on revenues.”

Meanwhile, a spokesman for the Professional Association of Self-Caterers has described the rule of six as a “hammer blow” for self-catering properties.

“Anyone with a property that sleeps more than six is going to be affected by this, and the larger the property, the bigger the impact,” said the spokesman. “The chief medical officer, Chris Whitty, has commented that these new rules are unlikely to be lifted within three weeks. If they’re not lifted by December and the crucial Christmas and new year season for larger properties, there will be carnage.

“Members might consider closing off additional bedrooms, modifying their advertising to attract groups of six or dividing larger properties if possible. Any groups that claim to live together or be a bubble larger than six should be asked to confirm this in writing.”

David Tucker, owner of urban walking tour company London Walks, has stated that his businesses had already started offering virtual tours while making their 60 walks more Covid-secure. “The uncertainty has been particularly difficult because we’ve had to try and anticipate what the likely future restrictions could be,” Tucker explained.

“To this end, we’d already decided that groups would be no bigger than 15. Now, groups of six will mean five walkers and one guide for our range of tours – so the capacity of our walking tours will be cut by half. There has to be government support to counteract this.”

Meanwhile, thousands of businesses continue to be affected by a number of local lockdowns around the UK, with Birmingham the latest area to introduce more stringent restrictions in response to a flare-up of coronavirus cases. The government has announced a new grant scheme for businesses in England affected by local lockdowns, worth up to £1,500 for every three weeks they are forced to suspend trading.

Though this new cash injection will be welcomed by many businesses in the short term, British Chambers of Commerce director general Adam Marshall stated that for most the support offered would not be enough to “offset the resulting cash crunch”.

He added: “Ministers should increase the amount on offer to ensure businesses and jobs are protected, and extend coverage to more firms that are hard-hit but not forced to close.”