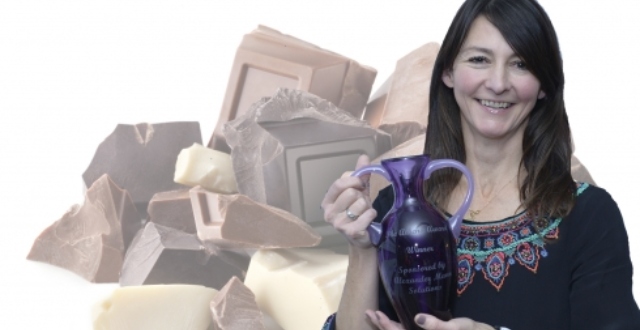 NatWest everywoman Award winner Helen Pattinson is the Founder of Montezuma's, a company which started making chocolate by hand in 2000. Winning the award in 2013 was a huge highlight of her career, and below she shares her story, tips and secrets to success.

Do you have an exciting story to tell? Nominate yourself or someone you know for the NatWest everywoman Awards today.

On setting up the business: My husband Simon and I used to be lawyers working in London but very quickly we got bored of the rat race and felt that there had to be more to life. We gave up our jobs, sold our house and put everything into storage except our rucksacks and tent, and set off for a year travelling around South America. We discovered cocoa growing in Venezuela and were instantly fascinated by the origins of our favourite food.

We returned to the UK full of ideas about how to make chocolate our business and a year later, in August 2000 we opened our first Montezuma’s store in Brighton.

We were passionate about our products and committed to making the business a success. Every hurdle was just another one to be overcome and every time we did that, we were one step closer to our goal. Since starting, there have been many difficulties. It was incredibly challenging when the manufacturer we had found to make most of our products went bust just before we were due to open. We thought it was nearly all over before it started. This was when we decided to become manufacturers as well as retailers. A tough decision, but one that has been the making of the business.

On overcoming struggles: We have had many! Don’t they say what doesn’t kill you serves to make you stronger?  I really believe that both I and the business are better off for having been through many hard times. So long as you survive, they are lessons well learnt.

On promoting a business: We make a product that is highly desirable so most of our marketing methods involve getting people to try our chocolate. That might be doing tastings in our stockists like John Lewis or Liberty’s. In our own stores or it might be placing chocolate in goody bags for high profile events or getting it into celebrities’ hands in the hope that they mention us. We never pay for advertising as it’s so expensive and we are selling a relatively low value item so the return on the investment is just too small. But we love editorial and always send chocolate to the press so that they can write about us or review our products. You should be your own best marketeer, tell everyone about your product or service; it’s the cheapest tool and customers love to hear about it from the founder’s perspective.

On celebrating achievements: We have had many highlights but very early on in the business Rick Stein’s researcher called us to let us know that he was writing about us in his new book, Food Heroes of Britain and we were his ‘Chocolate Superhero’. There was only one superhero and to be recognised by such a well known and loved foodie was so exciting; he gave us a huge amount of confidence in our creations.

"I believe you have to appear confident to lead others and show people that you’re in control of a situation."

On staying motivated: I don’t think you could get a business up and running without a huge amount of personal motivation. Before the business is even off the ground, you have to work long hours for no reward other than the satisfaction of seeing a little bit of progress towards your goal. Once it’s up and running, you can’t ever stop growing, progressing, changing and creating; there’s too much competition out there to stand still. If your only motivation is money, setting up a business is not the way to go but it will give you rewards in other ways that you’ve probably never considered.

On growing confidence: I’m not a naturally confident person so I make a huge effort sometimes to appear confident. I believe you have to appear confident to lead others and show people that you’re in control of a situation. Sometimes it can be something really silly like dressing for an occasion that makes me feel much more confident but at other times, it’s having all the facts and understanding a situation that will give me all the confidence I need.

On being a team leader: We have up to 100 staff at seasonal times so I have to be a team leader in the sense of leading the business, but I’m fortunate that I have quite a few managers leading their teams now. This has taken a lot of the day to day details off my plate and allows me to think more strategically about the business.

"Our future was in our bank’s hands; the key was to stay positive or at least show the outside world that we were positive."

On setting success markers: I’m not sure it’s very helpful to compare yourself to peers in terms of success. I feel very successful having set up a business that is running well and still growing. I also feel fortunate in knowing I am can achieve a balance of being able to spend time with my family and do all the other things that I am interested in. Sometimes it doesn’t always go to plan but adaptability is the key. I don’t feel the need to compare the size of my house or the type of car I drive to my peers, this will never bring a great deal of happiness since there will always be someone with bigger and better!

On tackling critical situations: In 2008 we really suffered like many other businesses, when we suddenly needed cash after a hot Easter and excessive stock. The banks were having their own crises so instead of this being a fairly standard discussion with our bank manager, it was elevated to a whole credit application and review of our business. Our future was in our bank’s hands so it was a very worrying couple of months. It was hard to stay focussed when everything we had created was at risk but we brought on a non-executive director and put together three year forecasts to show the bank we were very much still in business. The key was to stay positive or at least show the outside world that we were positive.

On confronting tough conversations: Prepare and prepare and then go for it! Imagine all the questions you might get asked and prepare your answers and remember that the other person is most likely dreading it too. Be open and honest but stick to your guns.

On business rituals and routines: When I’m in the office, the first thing I do is check the bank accounts. It sounds shallow but given our cash disaster in 2008, I track our finances daily and constantly adjust my forecasts. I try to deal with emails in the morning and then switch it off for a few hours to get some real work done.

On gadgets: I’m afraid I am addicted to my iPhone and iPad which I don’t necessarily think is a good thing but it does mean I can keep up to date while I’m on the move or out with the family.

On winning the NatWest everywoman Award: I was so excited and surprised to win the award. There were so many amazing businesswomen at the Awards that I didn’t think I had a chance. I have met some great people through the Awards and subsequent events; it’s really good to be able to talk business with other women as this is something I tend to avoid with my friends. It doesn’t seem to matter what type of business they’re in - I find that many people have similar issues and it’s great not to have to reinvent the wheel every time we have a problem!

Nominate yourself or a friend for FREE today!