New strategies for a new normal - Brought to you by NatWest 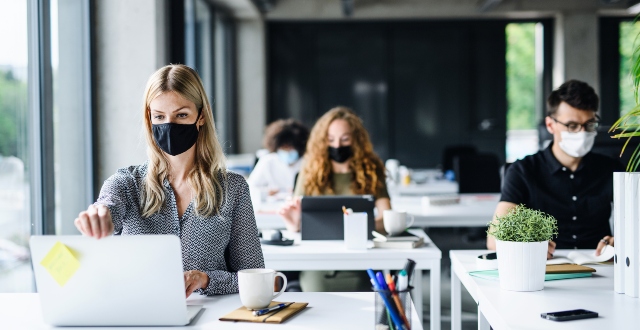 How can businesses best position themselves for recovery? We look at the actions that could increase resilience, and the opportunities that could open up as a result of changes in the way we live and work.

We don’t know exactly how many people have been working from home, but economists have estimated that it’s between 40% and 70% of workers in the US and Europe. Not everyone will want to go back to office life, at least not all the time, and maybe not during the same hours.

So how do you accommodate the wishes of your staff? Some businesses have told their employees that they can work at home for ever – for example, Twitter and Fujitsu. But not all jobs can be done from home, and many employees don’t have the space, the internet connection or the facilities to work efficiently.

Flexible working has shifted from perk to essential component of the employment contract. Monica Costa Dias, associate director at the Institute of Fiscal Studies (IFS), points out that scattering working hours will be a way not only to retain staff who don’t want to use public transport in rush hour, but to attract a wider range of skilled but cautious employees in future.

“The use of public transport is very concentrated at particular times of day,” she says, “and this will incentivise firms and workers to relax their work schedules.”

The Energy Saving Trust points out that homes in the UK account for 30% of energy use and a fifth of greenhouse gas emissions. It also claims that a “robust government programme to significantly reduce carbon emissions from homes could generate 200,000 jobs”.

With £3bn of UK government grants on offer, there are direct opportunities for some businesses, especially in the construction sector. The UK’s ageing housing stock loses heat faster than those in mainland Europe, and even in the Nordic countries, where insulation has been more of a capacity. So homeowners from September will be able to apply for vouchers under the Green Homes Grant that pays two thirds of the cost of better insulation and similar energy-efficiency measures, up to a limit of £5,000.

Meanwhile, cutting back on the use of motorised transport halved air pollution in London, according to the mayor’s office, with similar results in other cities. The government has also announced £2bn to encourage cycling and walking to work.

And there’s also a £40m Green Recovery Challenge Fund designed to create jobs in nature recovery and conservation. It is projected to create up to 3,000 jobs and protect another 2,000 workers in this sector.

Since 1990, globalisation has created long, intimately connected global value chains. Many products are created from components that are assembled, often just in time, around the world.

Many businesses that experienced supply problems are considering what they need to do to keep their doors open during a future crisis. The instinctive reaction is to reshore the supply chain. But for most businesses, it may be more appropriate to diversify, rather than abandon, the global supply chain.

Sébastien Miroudot, a senior trade policy analyst at the Organisation for Economic Co-operation and Development (OECD), has been researching this topic.

“Are the skill sets of people who have been displaced going to match up well with requirements of jobs being created? Do we want to think about a labour market that can be more nimble and resilient to shocks?”Robert Joyce, deputy director, Institute for Fiscal Studies

“The first mistake is to equate self-sufficiency or domestic production with robustness,” he says. “The second mistake is to focus on the location of production; the overriding imperative during a crisis is to maintain and scale up production.”

Robustness matters if an interruption in service has a catastrophic effect: for example, medical supplies. But bringing all the elements of the supply chain to the UK, with permanently higher costs, may not help if the next crisis is local. And if a day or two of disruption is not fatal, it may be better to focus on resilience instead. Both problems can be partially solved by having more than one source of supply, based in more than one offshore location, or by improving the flow of information from suppliers, or simply by holding more buffer stock.

“It is time to take stock of your IT spending, because we are in this for the long haul,” warns Jesse Stockall, a cloud management specialist at Snow Software.

“Many businesses were in the early stages of a digital transformation when the lockdown hit, replacing paper-based processes or in-house IT with pay-as-you-go software applications in the cloud. The lockdown has massively accelerated these plans. We have signed up for Zoom licences to replace meetings, bought Slack licences for informal discussions, plus many types of cloud applications.”

This rapid pivot can, however, hurt your cash flow in the rest of 2020. Because the cost of these applications ticks over like an electricity meter, you might have unnecessarily inflated the cost of doing business, maybe by duplication of resources, maybe by buying too many licences, maybe by opting for the most expensive type of licence for an application like videoconferencing. “You need to identify software you’re not using,” Stockall warns. “If you don’t, you’re flushing money down the toilet.”

The sums are eye-watering. Flexera, a firm that optimises spending on IT, estimates that 35% of cloud computing spending is wasted. Quadrotech, a specialist in software licensing, surveyed its users and found that 15% of Microsoft 365 licences it paid for were not being used at all, and another 9% were used only for email.

Recently, Stockall worked with a client that discovered it had 70 different cloud accounts, all signed up for on business credit cards by employees who didn’t know that another department had already bought what they were looking for.

Snow Software, like Flexera and Quadrotech, is one of a new breed of company that specialises in helping businesses optimise the cost of their digital assets. But, even if you don’t call in the experts, Stockall recommends a post-lockdown on software spending until you have worked out what you have just bought.

Reimagine jobs – and reskill for them

“Are the skill sets of people who have been displaced going to match up well with requirements of jobs being created?” asks Robert Joyce, deputy director at the Institute for Fiscal Studies and head of its income, work and welfare sector. “Do we want to think about a labour market that can be more nimble and resilient to shocks?”

Flexible working, green technologies, putting IT in the cloud, different ways of manufacturing, and a thousand other adjustments mean that the workforce we may need in the future will be different. The danger is that the expected two million freshly unemployed people in 2020 will have skills that make it hard for them to get back into good jobs.

And so we are entering a period of what economists drily call “labour market adjustment”, which basically means a lot of people will need to find new careers, and that people who do hang on to their jobs must learn new skills. Meanwhile, productivity is stagnant. Joyce’s flexible labour market will mean that existing jobs will have a much greater focus on skills development, because it’s usually more efficient to upskill an employee in a scarce skill than look for a new one.

While the government has promised a retraining ‘revolution’, we don’t yet know what incentives will be offered, and whether they will be to employers, employees, or the unemployed. But we do know that a recovery depends on everyone taking this problem seriously, starting today.