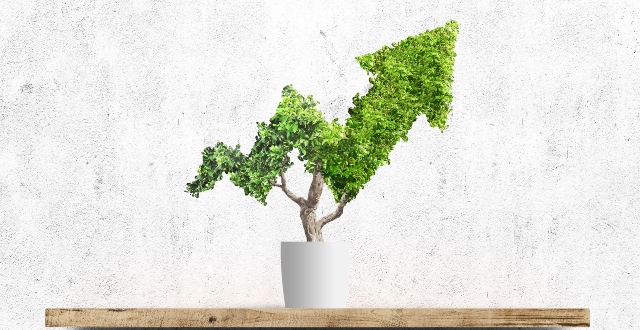 Embracing a just transition to a climate-neutral economy can help ensure the sustainability not only of the planet, but also of your business.

SMEs’ inclusive approach to sustainability can be a “powerhouse of amazing practice and change” in inspiring communities to tackle the climate change crisis.

That’s according to Lizzi Testani, who spoke of businesses’ power to lead and motivate society to make a positive environmental difference during Working Towards a Just Transition, a recent webinar hosted by the bank and showcasing some of the UK’s most innovative sustainability initiatives.

“Small businesses add a huge amount of value to communities as it is,” said Testani, COO at Bristol Green Capital Partnership, a network of over 1,000 member organisations committed to working towards Bristol becoming a sustainable city with a high quality of life for all. “[SMEs] are really connected to communities through employees and their families,” Testani said, so any changes made in the workplace will spread out through the community via the workforce.

Her views were echoed by Tessa Clarke, founder of OLIO, an app that enables surplus food to be shared instead of thrown away, by connecting neighbours with each other and businesses. “If you look at the whole problem and what needs to be done, it can be overwhelming, which can paralyse you into inaction,” she said. “But you just need to take the first step; from that you take the second and then you’ll make incredible progress.”

Clarke presented some stark statistics about food waste as she highlighted the need for all businesses to play their part in tackling climate change.

“Globally, a third of all the food we produce each year gets thrown away,” she said, “yet one in nine of the world’s people go to bed hungry every night. And the environmental impact is devastating. A land mass larger than China is used every year to grow food that is never eaten. A quarter of humanity’s fresh water is used to grow food that is never eaten. When you throw away food, you also throw away all the resources that went into its production – energy, water, labour, resources, packaging, manufacturing, distribution, refrigeration. And then most food waste goes into landfill and creates methane, which is 23 times more deadly than CO2.”

Diversity and inclusion are key to a just transition

Businesses have a huge responsibility not just towards the planet, but in doing so to embrace the ‘just transition’: a systemic, whole-economy approach to sustainability outlined in the 2015 Paris Agreement on climate change, which focuses on the interests of workers in the shift to a resilient, low-emissions economy. As Sharan Burrow, general secretary of the International Trade Union Confederation, explained in a 2017 report, “there can be no doubt that a zero-carbon world is possible, but we have choices about how we manage the transition. A just transition ensures environmental sustainability as well as decent work, social inclusion and poverty eradication.”

The values of a just transition include maximising the social benefits of the change by creating high-quality green jobs; mitigating social risks by avoiding stranding workers and communities along the path to change; and empowering those affected by the changes that happen. As part of a commitment to a more sustainable future, businesses have a huge responsibility to their workers and beyond; diversity and inclusion are therefore vital for any business trying to make that just transition, agreed the webinar’s speakers.

“My view is that the root cause of the mess we’re in is the lack of diversity in leadership positions in organisations,” said Clarke. “It’s vital to ensure all voices are represented as you pull together your plans.”

“Transition brings challenges, but it also heralds new opportunities in jobs and skills, and those benefits need to be accessible to all”Lizzi Testani, chief operating officer, Bristol Green Capital Partnership

Testani agrees. “Diversity and inclusion remain a really key focus,” she said. “Linked in to the Bristol Capital Green Partnership is our Black and Green Ambassadors programme, with (local community station) Ujima Radio, working to support emerging leadership and ensure diverse voices and experience have greater influence in shaping conversations and decisions around the climate emergency.”

Inclusivity is a key aspect of the bank’s own commitment to just transition. Head of sustainable finance and just transition Rishi Madlani explained how the bank’s work with businesses supported the national goal of “levelling up” economic and social prospects in all regions. “The just transition is critical for climate success,” he said. “It must be inclusive, place-based and sector-specific.”

That means it is incumbent on businesses and other organisations to take the lead, said Testani, whose city local authority became the first in the UK to declare a “climate emergency” and commit to becoming carbon neutral. Hundreds have since followed. “It’s important that the broadest shoulders are seen to be acting boldly early to carry the load,” she added. “Taking action to tackle social inequalities remains a high priority for business institutions. Transition brings challenges, but it also heralds new opportunities in jobs and skills, and those benefits need to be accessible to all.”

Taking the first step towards a just transition

But where does a business start on the journey and that just transition to sustainability?

Testani recommends looking at your business and finding even the smallest, easiest ways you can begin to make a difference.

“Start with your own impact and what you’re able to do, and engage with your workforce, make sure they’re heard,” she says. “I think that adds a different voice to some of the more usual contributors to the debate.”

Many firms “Are still coming to terms with what their climate action needs to be,” said Madlani. “But for this to be proper, sustainable action, we need to think about how we all include workers, how we create jobs. We have capital to help businesses in their journeys to achieving the just transition – I’d advise everyone to talk to their Business Banking contacts about this.”

The most important step is the first step, agreed Clarke, even if that means simply committing to action. “The very first thing to do is to make climate change action and a just transition a top three priority for your organisation. If it is identified by leadership as in your company’s top three priorities, guess what: it will get done.”