Unlock your best thinking: 7 websites and apps to inspire creativity 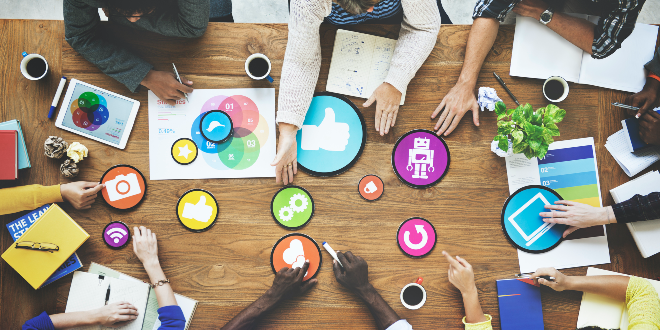 Seelig’s words quash the notion that creativity is the preserve of certain ‘types’ of people; everyone has the power to imagine and to innovate. But even she concedes that sometimes a healthy dose of inspiration is needed to get things flowing: The creative process, she says, “is deeply influenced by a myriad of factors in your environment”.

In the digital age, that influence may well just be a click or two away. We all know about the power of a rousing TED Talk to inspire your own ‘ideas worth spreading’, but the Internet is a treasure trove of little-explored websites and apps whose knowledge and interactivity can take your idea-crafting ability from ordinary to extraordinary.

Human beings have always found connections between the apparently unconnected – it’s one of the reasons you identify faces in cloud formations, see a man in the moon and litter your language with analogies and similes. This was the idea at the heart of 1000 Hands, a collaborative art project which creates pulsating, abstract shapes through fingertip movement across a screen.

Download the app and lose yourself in the unique, beautiful and dynamic shapes you create with a single flick of your finger. It’s highly addictive, and your shapes will grow in complexity in line with your confidence. Furthermore, your doodles (the creation of which is scientifically proven to help you remember forgotten facts, focus on complicated tasks and inspire creative thought through relaxation) may even make it into the beautiful public gallery.

For a lucky few, coming up with an abundance of business ideas isn’t the challenge; not knowing which of your many ideas to pour your energy into is the biggest blocker to realising your dreams.

If that’s you then either app will act as your back-pocket mentor: once you’ve input your ideas, you’ll be guided through a series of questions and exercises designed to challenge them from all angles, helping you to sort the great ideas from the good ones.

Karma Tube’s strapline is “Watch. Be Inspired. Act”, perfectly encapsulating the journey it invites its visitors on. Hit the homepage, browse a video or choose from a category and discover what inspirational humans around the world are doing to instigate change.

The curators hope it won’t just inspire you to create your own new ideas, but also to act on the mission statements of others. In the ‘everyday heroes’ section you’ll learn about the female photographer who donates her time to the Utah animal shelter where she creates such evocative and characterful images of dogs that their forever parents are soon knocking on the kennel door.

And under ‘environment’ you’ll meet 14-year-old Xiuhtezcatl Martinez, the "indigenous, environmental, eco hip hop artist and activist" whose work is inspiring an entire generation to think differently about the world they live in. All role models for how a simple idea can lead to big change; what will it inspire you to do?

4. LUNCHTIME LECTURES AT THE UNIVERSITY COLLEGE LONDON WHEREEVER IN THE WORLD YOU ARE

The key to the creative success of the world’s greatest minds (Leonardo da Vinci, Aristotle and Hildegard of Bingen to name a few) lay not in their expertise on a particular subject, but in their journey to becoming knowledgeable across a diverse range of fields.

The latter was considered a polymath on account of her work as a Benedictine abbess, writer, composer, philosopher, linguist, medical researcher, botanist and mystic, while the former’s lifelong search for knowledge made him one of the original ‘Renaissance Men’ (a clever person good at many things), as influential in science as he was in art. Everything in the world is connected, and since your ability to make connections between disparate things lies at the heart of creative thinking, a broad knowledge base is all the better for flexing your creative muscle.

University College London’s public lunchtime lectures allow you to dip into facets of its academic programme in accessible 35-minute talks. And, if like 99.9% of the population you can’t swing by the campus on your lunch hour, videos of each event are handily available on the YouTube channel, where a psychoanalysis of female poisoners in the 19th century sits alongside a deep dive into the earth’s gravitational force and a fascinating dissection of modern slavery.

The great British puzzlist Henry Dudeney once said: “The curious propensity for propounding puzzles is not peculiar to any race or any period of history. It is simply innate, though it is always showing itself in different forms; whether the individual be a Sphinx of Egypt, a Samson of Hebrew lore, an Indian fakir, a Chinese philosopher, a mahatma of Tibet, or a European mathematician makes little difference.”

In more recent times, this human desire to solve puzzles has been linked to an improvement in numerous cognitive functions, and even reduced chance of developing Alzheimer’s disease.

Puzzle website Lumosity presents hundreds of puzzles, each designed to target different areas of the brain. Alongside creative problem solving, there are games and brainteasers to test your speed and agility, memory, attention span and flexibility. Subscriptions are paid for, but there’s a free introductory offer whereby you can customise the brain-training induction according to the neural functions you personally want to bolster.

www.calm.com (for iOS; for Android)

Stress is the ultimate killer of creativity. And while guided meditations or a quick walk in nature are the perfect remedies, they aren’t necessarily options in the workplace.

The second best thing is a quick trip to calm.com, where you can choose between a solo or guided meditation for two, five, ten, 15 or 20 minutes, select a beautiful scenic image to gaze into for the duration, and pop in your headphones to get the accompanying nature-inspired soundtrack. Perfect for a quick stress reduction before or after a fiery meeting, or for focusing, thanks to the accompanying apps, on the here and now during your morning commute.

The oft-cited advice of leaving your desk at lunch for an inspirational jaunt around a gallery is all very well and good. But if the best your office offers in terms of proximity to museums is a dusty filing cabinet in the corner, then the Internet is your saving grace.

Google’s art project combines the online collections of some of the world’s greatest objects d’art, meaning you can discover the crafty delights of new Delhi, the silk tapestries of Kyoto, and Mexico City’s very best oils on canvas. And it beats queuing any day of the week.

A loud, proud 67% of everywoman Network members assert that they have bucket loads of creativity, which is fantastic. But that means one third of you are either unsure or entirely dismissive of your innate abilities to be creative: 7% of you state “I don’t have a creative bone in my body” while 27% of you say that while you’ve been known to have your moments, bolts of inspiration are few and far between.

One of the biggest blockers to free-flowing creative thought is the false but persistent myth that creativity is an artistic output, exclusive to painters, writers and “ideas people”. One of the best places on the web which challenges this notion of creativity is The Creative Post.

Founded by three PhD graduates, this not-for-profit digital magazine will force you to challenge your perceptions and encourage you to find the creative within yourself. Three articles to start you off are You are what you listen to, an essay exploring the science of identity and musical choices, Mistakes, a philosophical debate around how you can grow through getting messy with creativity, and Improve your creativity with this science-backed guided meditation!, a does-what-it-says-on-the-tin downloadable which might just be the de-stresser you need to fire up your imagination.