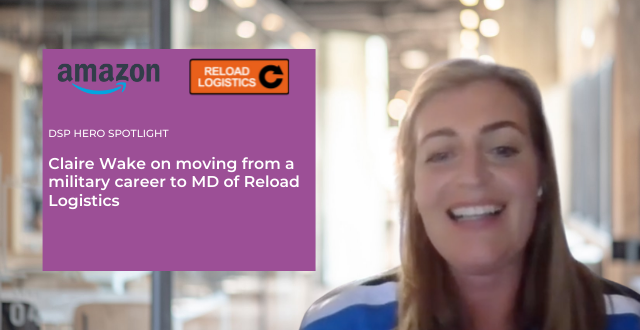 Managing Director of Reload Logistics, Claire Wake served in Afghanistan and Iraq, before retiring from the military in 2018 and becoming an Area Manager for Amazon. In mid 2020 she took the plunge and left her role at Amazon and is now one of the most successful Delivery Service Partners engaged by Amazon in Europe. Claire talks about having the confidence to take a leap of faith and why authentic leadership and a motivated team has been key to success in both stages of her career.

Managing Director of Reload Logistics, Claire Wake served a full military career, including deployment to Afghanistan and Iraq, before retiring from the military in 2018 and joining Amazon as an Area Manager. Two years later she left her role at Amazon and joined The Delivery Service Partner (DSP) program to launch her own logistics company —delivering parcels for Amazon. Now one of the most successful Delivery Service partners engaged by Amazon in Europe, Claire talks about having the confidence to take a leap of faith and why authentic leadership and a motivated team has been key to success in both stages of her career.

What attracted you to logistics as an industry?

I largely left the military because once I'd had children, I quickly realised I wasn't going to get the jobs that I wanted. At the time, my husband had a good career in the military and was going places, so we made the decision that I would take a career step back and look after the children and think about what I was going to do next. Amazon has a great veterans’ network, and I had some interest in logistics, but the decision to join as an Area Manager was initially more about becoming a part of a company I liked and continuing to work in hands-on operations in a fast-paced, dynamic environment. Amazon is a massive company and still growing, so I also knew there was great job security.

When did you realise that you wanted to run your own business?

I'd never considered owning my own business when I started at Amazon. My two-year tenure as an Area Manager was busy and I quickly found myself again having to juggle work and the kids.

The Amazon Delivery Service Program was being advertised at the time and I remember thinking, that I needed something that was mine and that I owned so I could plan my time and make it work around me. So, I set up my business in June 2020 in the middle of the pandemic, when the kids were being home-schooled. I saw it as a great opportunity to work in the logistics space — online shopping boomed during the pandemic, and I could see that trend was set to continue. This opportunity coincided with my personal pinch point and the question was, ’How am I going to make it work?’

What are your key drivers in running your own business?

For me, becoming a business owner was about being able to plan my own time and not rely on other people to make exceptions all the time before I have a family. For many women, running their own businesses can be a way to take back power and I think the thing that holds many back from setting up their own business is being able to take that initial leap of faith. The financial security aspect is another block as well, because you want to make sure food is in the fridge and bills are paid — I think that's inherently built into us as women.

You’ve taken your business from start to success in under two years, what is your secret?

Having a great team behind me, which I have grown myself. I engaged a young driver to be my manager, for example, and a lot of people questioned my decision. But I wanted to engage someone who had not been a manager before so I could grow and shape him the way I needed him to be, rather than someone from another company who had experience, but would be set in their ways. I've also instilled a lot of my military values in my leadership — in that I don’t ask or expect any one I engage to do anything I am not prepared to do. And I'm competitive; if I look at a league table, I’ll want to know why we’re at number five, work to change things and be number one next week. Having a good team means the people I engage will always want to achieve more.

What transferrable skills have you taken from the military to logistics?

Authentic leadership and being able to motivate. I’ve served in some horrific environments and the team lead skills I learned in the military have been very useful when motivating my drivers. And if people get themselves stressed, I always say we're not dodging bullets, we’re delivering brown boxes. Being able to keep everyone level-headed is important as well as understanding what it really is we're being asked to do.

What kinds of challenges did you encounter when becoming a business owner and how did you move past them?

I had a good, well-paid job at Amazon and when I walked away from it to start a business my friends all thought I was crazy. The initial months were frantic, working seven days a week — and it was a lonely place to be; I didn’t feel I had anyone I could talk to about it. In addition, all the work-life balance problems that were the reason I'd left the military to join Amazon in the first place were now worse than ever, so I had to get my family’s buy-in and support for what I was doing. I had an end goal, and I have now reached a point where I have grown two managers who are able to look after the company for me, so I can take that step back and do the things that I want to do.

Has there been a shift in the way in which you look at yourself and your abilities?

I’ve often found it difficult to take credit in the past, so when people promoted the fact that we’re one of the fastest growing and biggest logistics companies that work for Amazon, I used to feel uncomfortable with the attention. It’s only recently that I've been able to say that to people and to look at myself and think, ‘yeah, you've done really well here’. I can now acknowledge we rightly deserve to be there because my team and I work hard for that.

What's the biggest lesson that you've learned on this journey so far?

I didn’t know just how resilient I was before this. In the army, you have a massive team around you; but as a business owner it’s all on you. Logistics is a busy environment which is constantly changing in line with customer demand and so I need to stay agile and make sure I have a strong pool of drivers and sometimes you go through highs where everything is perfect, then you lose six members of the team in one go and then think, ‘Oh my gosh, how am I going to fill these vans?’. There are always ups and downs, but the team and I see this now — for every down, there's an up. So, it's just about learning to ride the roller coaster.

What advice would you give to a woman wanting to follow your path into the industry and set up their own business?

Believing you can do it is the first step to having the confidence to take a leap of faith. Just go for it. And certainly, if you want that initial security of owning your own business, then I don’t think there's a better way to do it than with Amazon and its support and backing. The support I have had from Amazon has given me the confidence and the knowledge to set up a business and I’ve also just launched another business with my sister too on the back of that. It’s a great stepping stone into the world of business ownership.

If you are interested in joining the Amazon DSP program as a business owner, please enter your details here for more information. With low startup costs and access to Amazon's technology and logistics experience, this is an opportunity to build and grow a successful parcel delivery business. So why not join a community of Amazon Delivery Service Partners in one of the fastest-growing industries in the world!